Compose music and record vocals in your favorite styles quickly and online!

RapMe is a free online beats creation program, virtual drum machine and full-feature tool for recording rap music. This service was created in order to automate the process of track mixing, so that the beatmaker don't need perfect musical theory skills to be able to compose music. This program is designed for beginner rappers.

If you want to develop your rap performance skills or record some demo songs you can use RapMe. Besides hip-hop beats here you can record song in other different genres. RapMe allows you to make a real hit for publication on music charts in several minutes.

RapMe works online without installing of many pre-downloaded VST plugins and also doesn’t require powerful equipment. Just click on the “Start” button in the top block of this website to run the application and open the working area of the sequencer.

Now the application works only in the desktop version of Google Chrome browser and other browsers which was developed based on Webkit and Chromium. Project updates every month and in version 2.2.0 developers plans to create a mobile version and a separate application for iOS and Android.

The basis of every song is an original idea. Subsequently, the author forms an idea of what style the track will be in, it's mood (lyrical, aggressive or happy), it's tempo (ballad or dance music) and writes some lyrics. Once the lyrics are written, it is time to compose music for instrumental part of the song (i. e. beat).

Audio mixing is the process by which multiple sounds (e.g. song instruments and vocals) are combined into one channel. During this process a beatmaker manipulate a source's volume level, frequency content, dynamics, and panoramic position. In good-mixed tracks there are no frequency conflicts or extra noises and all details are heard. This routine work usually takes a long time, requires an experience in sequencers such as Fl Studio or Cubase and sometimes artists need a help of professional sound producers. RapMe was created to automate the processes that prepare songs for release. A rapper can concentrate solely on creativity, because special algorithms take care of the sound quality imperceptibly for the beatmaker. An artist only must choose the tempo and instruments suitable for the future song.

A composition consists of 4 tracks:

All beat tracks can be configured either manually or automatically using the built-in backing track generator. Track generator choose the appropriate samples from a large library of loops depending on song's genre.

The program allows you to create an introduction to the song which precedes main minus. The composition will be more complete if several instrumental notes will be played before the voice part. During the intro, you can also add a few words, screams or sound effects like city noise, gunfire, police chase, etc.

It is time to record vocals.

To start voice recording, click on the “Record” button in the very center of the beat machine. Don't forget to correctly select a microphone from the list of devices that are connected to your computer.

Export only instrumental track if you want to record a voice via another program (just select “Continue without microphone” option in the equipment settings window). 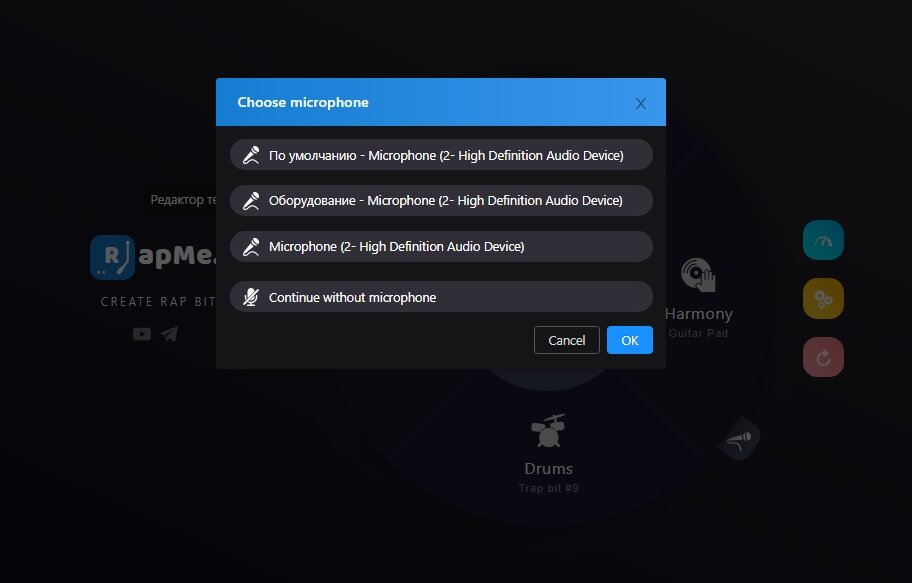 To make vocals sounds as good as possible, you should create the right situation. Professional studios use separate rooms with high-quality soundproofing. If a rapper works at home, then he needs to take care about avoiding of extraneous sounds and white noise against the background of his voice. The result will be better if all windows and doors are closed and a carpet lies on the floor. It is necessary to record vocals in the headphones so that duplicates of playing tracks are not heard.

Buy a good microphone. The service works with any equipment, but a sound will be better if the microphone is connected to an external sound card.

After the record was finished, you can listen to it. If you like the final result, download and share it with your friends in social networks, otherwise return to work. RapMe will save your settings even if you close the program and decide to continue working on another day.

Change the voice by applying filters to it, for example:

RapMe also has built-in Autotune (an audio processor which allows vocal tracks to be perfectly tuned according to rest instruments).

The final step of music creation (made automatically by RapMe build-in processors). During the export of a finished audio file the spectral and musical balance, stereo base, compression and RMS are sets up in the background. Thus, the sound is normalized. Reverb, chorus, delay, phaser effects are applied to each track of the beat. The volume of the entire composition is leveled with the Limiter plugin.

During audio mastering, the program helps to clear the vocal part from accidentally recorded interference and also removes all noise in ranges that conflict with other instruments (this is calling "Equalization").

When the track is ready to become hit

Song sound mainly depends on harmoniously chosen samples, high-quality recorded vocals and professional audio mixing and mastering. This application is made to automate the processes of creating beats and save rappers from the need to learn complex aspects of sound design.